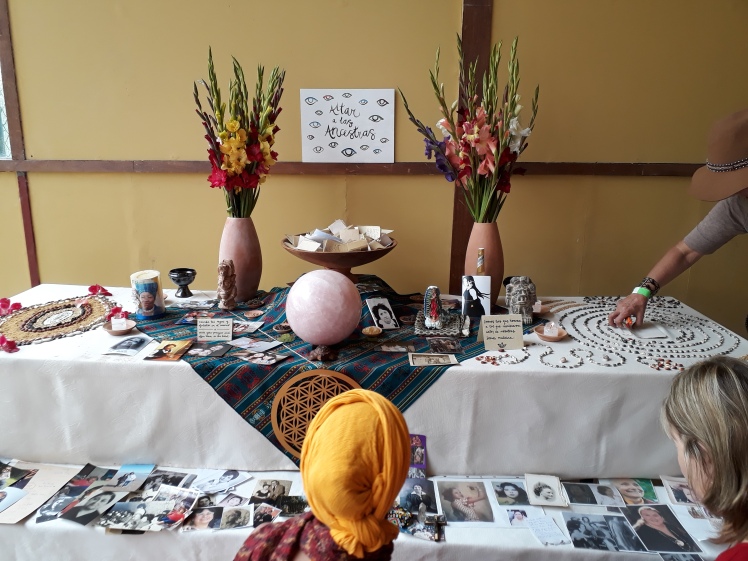 We met in a spa hotel in Pisac in a large conference room. In the middle of the room a ceremonial circle had been created, where the 12 “Grandmothers/ Abuelas” sat ready to connect with us and to welcome us to our week together. I remember feeling in awe and a little nervous. All around me were women from many different countries, the majority from South America. Having never been out of Europe before everything was new to me and I felt like an expectant child ready for new experiences. I had studied Spanish briefly many years ago, but my memories of the language were very limited. Despite the language difficulties I felt as if I belonged.

As the Grandmothers came forward and spoke the women around me stood up shaking rattles, beating drums and ululating when they really appreciated what was being said. I had seen women ululating when in grief on TV, but this was about joy and appreciation. I felt it move through me and I wanted to be part of it. As the days went by I learned to respond in the same way. There was a thrill that went through the group of women in this gesture of appreciation and I understood at last what true sisterhood in a group meant. I was part of something deeply sacred.

In the room four altars were set up with displays of beautiful flowers, shells and stones. Each altar had a specific theme. The first was the altar for the Ancestors, the second was the altar for the children, the third was the altar for love and partners known and not yet known and the fourth was for change and transformation in our lives. We were asked to place photographs, items of deep personal meaning and our intentions on these altars. During the week, through prayers and ceremony, we would receive healing and a new clarity around these issues. We were encouraged to concentrate on what we wanted to let go of and what we wanted to bring into our lives.

We had received communications from the three group leaders in the weeks and months before the Convergence telling us of the purpose behind this meeting of women. Mother Earth, Pachamama, was calling for help in the harshness of climate change, the accelerated melting of glaciers, drought and bush fires. The “Great Mother” was suffering. In bringing together women from all cultures, gathering our waters, earth, ashes and feathers, representing air, we were binding together the Earth for healing through prayer, ceremony, dance and song. We were raising a prayer for the planet….